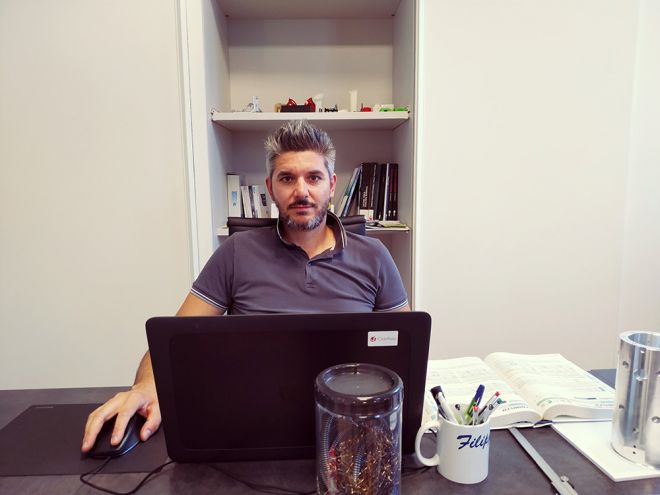 This email address is being protected from spambots. You need JavaScript enabled to view it.

My name is Filippo Borgato, and my professional career began in 1993 in the province of Venice, when I was hired as an apprentice in a small company (at that time called Bottega) providing maintenance on moulds for plastic materials. The company, founded only a few years earlier, shared its history with many other small Venetian companies in the mechanical sector, created in garages and under steps thanks to their founders' stubbornness and sacrifices. My first role was as the "workshop boy", but I slowly learned to work at the benches and use traditional machines like the miller, pantograph, radial drill, lathe and other tools. After a lowly start, little by little I began to get passionate about the work. I finished my apprenticeship in 1998, which coincided with my very first experiences with CNC machines; the same year, I was entrusted with an electronic milling machine capable of scanning resins and three-dimensional models.

Between 1999 and 2000 I used the first CAD/CAM tool (Delcam), at that time considered the height of manufacturing technology. In that period I also had my first experiences with modern 3-axis work centres, equipped with tool change, 3D calibrator and ethernet network.

Over the years, I decided to abandon the CAD design of the moulds to specialise in CAM programming and CNC machine management.

The first 5-axis continuous machining centre was entrusted to me after a few years. Over time, the CAM world's needs became increasingly vertical, requiring tool databases with parameters, "automatic" work routines and process simplification. I continued working with the tool I began on, the Powermill/Powershape.

In 2012 I decided to finally stop working in the workshop (reluctantly, as chip removal had become a passion as well as a profession), in order to move to the other side of the barricade: first the commercial world, then the technical one, gaining significant experience at many leading companies in their sectors (software, tools, services). In particular, my most formative experience was at a well-known software company: my role as an application engineer involved providing technical support to manufacturing area customers using Delcam's CAM solutions (Featurecam and Powermill). During that time I learned to manage customer training, create post-processors, provide technical support for developing complex projects and, in general, to manage customers (even the most "troublesome") and their work problems.

In 2015 I ended my time as an employee and towards the end of that year I decided to become self-employed, which quickly evolved towards enrolling in the trade register. At the same time, I moved my personal and professional residence from Veneto to Emilia-Romagna.

To date, as well as my experience in the manufacturing world, I have always simultaneously kept up with the world of agromechanics (a sector I have been very passionate about since childhood). Along with some collaborations with trade magazines, I had the opportunity to organise various events and activities. Today I am qualified to drive wheeled agricultural vehicles, allowing me to work, whenever possible, with agromechanical companies in the role of tractor driver: my form of stress relief.

To create a network of client companies to provide services and support based on timeliness and quality of the services offered, counting on a long-lasting relationship between the parties. A flexible relationship, devoid of formality and with the sole objective of resolving critical issues as soon as possible.

To provide support for producing various types of component, creating a link between supply and demand.

This email address is being protected from spambots. You need JavaScript enabled to view it. - P.IVA 03728230362
©2019 Ciclofisso di Filippo Borgato - Design by ADVERA